I first discovered Challenge Poznan last September, after completing Weymouth, a quick Internet search later I discovered it was a fast race at a very reasonable price* (*£200 entry fee is considered good value in the world of IM racing), a few clicks of the mouse later and my bank balance a few hundred pounds worse off and I’d entered my ‘A race’ for 2016.

Fast forward to July and I’d had a great build up to the race, training had gone really well, I’d avoided injuries and my preparatory half IM at the Cotswold 113 had gone really well with a PB. I have to say big thanks has to go out to Chris Tasker who pushes me when needed but probably more importantly reigns me in. This balance definitely helped me stay free of injuries and in better shape this year.

Paola and I had decided to do the trip without the kids and make a bit of a holiday of it. The plan was to fly out on the Thursday, giving me enough time to prepare for the race (I.e. get stressed about things totally out of my control) and then fly back the following week, allowing some relaxation time.

The trip didn’t get off to the best of starts when I checked the oil in the car to discover I was missing the cap….thankfully I have a van as there was nowhere I could buy a replacement cap from at 7am. The rest of the journey went well and we safely arrived at Poznan airport, as did my bike. The apartment I booked was great and situated in the city centre, which is very pleasant, complete with a truly impressive square. We soon discovered that Poznan is very good value for food and drink, it cost us about £25 for a good meal, drinks and tip in the main square, where we were presumably paying tourist prices.

We were meeting some Dutch friends who we’d met the year before in Vichy, a race which ended in disappointment for me and Eric, one of the Dutch contingent who was also racing. Eric and I had a quick look at the lake and some of the course, the lake is an exceptional facility, complete with swimming pool, dry ski slope and grandstands.

After successfully registering and racking the day before I was feeling suitably stressed, the whole process had taken a while and I was confused about some parts of the race; not unusual for me.

Alarm went off at stupid O’clock and I felt good, having managed to get some sleep and staying out the sun (something I learnt a hard lesson about last year in Vichy). Eric and I wished each other luck (his wave was 5 mins later than mine) and I was in the water ready to go.

The swim start was about 400m from the water entry point so I was nicely warmed up by the time the cannon went off. I’d clearly not got far enough forward as there were a lot of slower swimmers blocking my path forwards. I finally managed to get some clear water after about 400m and found a couple of feet to follow. The swim was fairly straight forward and I realised I was doing good time on the few occasions I glanced at my watch. The course was a very simple lake swim, up one way, across and back down again. Most importantly I felt relaxed the whole way through the swim and got the added psychological bonus of passing a number of swimmers from the previous wave. Pretty quickly I was up and through the inflatable arch and into T1. I glanced at my watch and saw 56 mins, which was way better than my expected time, possibly the swim was a little short but I’ll take the time.

I got onto the bike and quickly got into a nice rhythm, I had discussed with Chris to start at an slightly easier power and crank it up after the first lap. The bike course at Poznan is 4 laps up and down a dual carriageway. It’s quite incredible that they close such a busy road for a triathlon weekend (there are sprint and Olympic races on the Saturday as well as the middle and long on the Sunday). I could feel straight away that the course was fast and hit my target power, it felt a bit hard so I eased off a bit and settled at 190 – 200 watts. By the end of the first lap my average speed was near to 36km per hour but my left quad and lower back were aching. I continued for 15km and the pain was getting worse plus my power was getting harder to maintain. I looked down and realised my saddle had dropped down quite a bit, I’d probably not tightened the seat post properly when putting the bike back together after the flight, I was annoyed at myself for not triple checking. I stopped adjusted the saddle and got back on the bike. Immediately I felt more comfortable and my power returned. I was really irritated that my average speed had dropped from 36 to 34.7 during the stop. I maintained that speed for the next lap and a half but was beginning to find it tough to hold my aero position, perhaps due to riding too long in the wrong position earlier in the race. I struggled to maintain pace and power for the next lap until I got a second wind for the last 20km. Although the course was fast it was pretty boring once you got past the bit of the course with support in it. Paola, Ferry, Noi and Ingrid were offering vociferous support whenever I went past, which really helped to lift my spirits. Another issue I had was the water at the aid stations were in normal bottles, not bike ones, so they wouldn’t fit in my bottle cage. This meant I only got water every 22km, which was longer than I wanted in the warm Polish sun. I had a target in my head of trying to complete the bike in 5:15, as this would give me 3:40 or so to do the marathon and get sub-10. My target before the race was sub-11 but sub-10 now seemed an achievable dream. As I struggled through the end of the bike leg I could see this time getting further away, however I was pleased still with a bike leg of 5:25 as I entered T2.

I left T2 in 6:29, knowing that a 3 and a half hour marathon would get me a sub-10 time. I started off with my pre-race plan, run sub 5 min km and walk the aid stations. I realised within 4km that I wouldn’t be able to maintain a sub-5 min km pace, so had to slow down a bit. My legs felt good but my heart rate was high, possibly due to the heat or the cumulative effect of the swim and bike before. The aid stations were also fairly limited, orange, banana, water or energy drink. I like crisps and coke too, so this wasn’t ideal for me. The run was a 5km run around the lake and then four 9km laps in and around the city. The atmosphere in the town centre, by the finish was fantastic, exemplified by our incredible support team. They were certainly the loudest group and I could hear them even before they saw me. I managed to do the first half in about 2:01 and just tried to keep the same pace. I was having to walk the 2 short hills (100m) as well as the aid stations but was keeping a steady pace and just counting down the km’s till the next time I’d pass the support in the city, with Paola, Ferry, Ingrid and Noi. I got to the start of the last lap and said to them that I would finish in about 10:45 with a big pb. I had a bit more of a spring in my step as I knew I was nearly done…before I knew it I was up and through the spectacular finish gate with a time of 10:35, a huge personal best. Paola bought me an ice cream and I found out that Eric was about 30 mins behind me. The finishers tent had lots of beer, pizza and burgers so that was good. I didn’t stay long here though as I wanted to see Eric cross the line. He finished in a pb time of 11 hours, with a big smile, redemption for us both after Vichy.

The race is a good one, that I’d recommend. It was their first long distance attempt so I think they’ll need to improve on a couple of things. The aid stations could have had more variety and they should have had water and energy drink in bike bottles. The only other grumble was the finish line being 5km away from the transition areas, not what you want to deal with after 226km of racing. In defence of the organisation they had to change the course due to an archaeological find 2 weeks before the start.

As for my result I’m absolutely delighted with the time and feel I’m getting closer to my potential best. I still think there’s more to give as my bike power was 30 watts down on target and I have more in the bag for the run. That being said I’m racing smarter and adjusting targets on how I feel.

Thanks as always goes out to all my friends and family who support me in my training and at the races. Cheers to all the Cardiff Tri lot who have pushed me on and got me out in the crap weather and to the swim coaches for their advice and guidance. Special thanks to Chris Tasker who’s training plans and advice have been the cornerstone of my improvements and who along with the VerinesVelo gang, are all training partners, friends and great people to get advice from.

We had an amazing week with our Dutch friends Eric, Noi, Ferry and Ingrid. Whilst Eric and I were on the course the 4 of them gave the most amazing support, it made such a difference and certainly helped me keep moving when things got tough.

Obviously special thanks to Paola for putting up with my obsession and coming along and supporting me every time, I may not always say I appreciate it but it does make a huge difference and I couldn’t do it without the support. 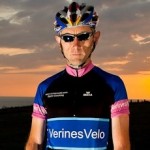